This virus has shown how connected we are. We’re fighting an invisible enemy. And no one is safe frankly until we are all safe.
And again, of course this is all contingent upon each of us continuing to do our bit.
And as I never tire of telling you
Let us not forget the basics.
Wash your hands regularly and for 20 seconds, wash your hands.
Do not gather in groups of more than six outside.
Always observe social distancing, keeping 2 metres apart from anyone outside your household.
And I want to stress one final point which may be relevant today as the weather threatens I think to take a turn for the worse. Some of you may be tempted to move the gatherings you’ve been enjoying outdoors, indoors, out of the rain.
I really urge you – don’t do that.
We relaxed the rules on meeting outside for a very specific reason – because the evidence shows that the risks of transmission are much lower outdoors, much lower outdoors.
And the risks of passing on the virus are significantly higher indoors, which is why gatherings inside other people’s homes are still prohibited.
Breaking these rules now could undermine and reverse all the progress that we’ve made together.
I have no doubt that that won’t happen, I’ve no doubt that that won’t happen. I think the British public will continue to show the same resolve in fighting the virus as they have throughout the outbreak.
We will get through this if we stay alert, control the virus, and in doing so save lives.
----------------------
フロイド 字幕
https://twitter.com/BorisJohnson/status/1270075916308357122

Let us work peacefully and lawfully to defeat racism and discrimination wherever we find it, and let us continue to… https://t.co/N9wKetEgTw

text:
https://www.voice-online.co.uk/news/uk-news/2020/06/08/prime-minister-boris-johnson-issues-statement-on-black-lives-matter-protests/
The statement he said: “The death of George Floyd took place thousands of miles away – in another country, under another jurisdiction – and yet we simply cannot ignore the depth of emotion that has been triggered by that spectacle, of a black man losing his life at the hands of the police.
“In this country and around the world his dying words – I can’t breathe – have awakened an anger and a widespread and incontrovertible, undeniable feeling of injustice, a feeling that people from black and minority ethnic groups do face discrimination: in education, in employment, in the application of the criminal law.
“And we who lead and who govern simply can’t ignore those feelings because in too many cases, I am afraid, they will be founded on a cold reality.
“Yes, I am proud to lead the most ethnically diverse government in the history of this country, with two of the four great offices of state held by a man and a woman of Indian origin; and yes, I am proud of the work I began to lead more than ten years ago to recruit and promote more young black people, in the police and other walks of life.
“This country has made huge strides. I remember the 1970s, and the horror of the National Front. I truly believe that we are a much, much less racist society than we were, in many ways far happier and better.
“But we must also frankly acknowledge that there is so much more to do – in eradicating prejudice, and creating opportunity, and the government I lead is committed to that effort.”
The prime minister went on: “And so I say yes, you are right, we are all right, to say Black Lives Matter; and to all those who have chosen to protest peacefully and who have insisted on social distancing – I say, yes of course I hear you, and I understand.
“But I must also say that we are in a time of national trial, when for months this whole country has come together to fight a deadly plague.
“After such sacrifice, we cannot now let it get out of control.
“It is BAME communities who have been at the forefront of the struggle against coronavirus – whether in health care or transport or social care or any of the other essential services that have kept our country going.
“And it is BAME communities, tragically, that have paid a disproportionate price.
“So no, I will not support those who flout the rules on social distancing, for the obvious reason that we risk a new infection at a critical time and just as we have made huge progress.
“And no, I will not support or indulge those who break the law, or attack the police, or desecrate public monuments.
“We have a democracy in this country. If you want to change the urban landscape, you can stand for election, or vote for someone who will.
“And so I must say clearly that those who attack public property or the police –who injure the police officers who are trying to keep us all safe – those people will face the full force of the law; not just because of the hurt and damage they are causing, but because of the damage they are doing to the cause they claim to represent.
“They are hijacking a peaceful protest and undermining it in the eyes of many who might otherwise be sympathetic.
“And as a society, we can and must do better.
“This month, on the 22nd of June, we celebrate the arrival of the Empire Windrush in 1948, and we remember the contribution of the Afro-Caribbean workers – in the NHS and across all public services – who helped to rebuild this country after the war.“And today, once again, we face a great task: to relaunch this country after Coronavirus. So let’s work peacefully, lawfully, to defeat racism and discrimination wherever we find it, and let us continue to work together across all the communities of this country, as we put Britain back on its feet." 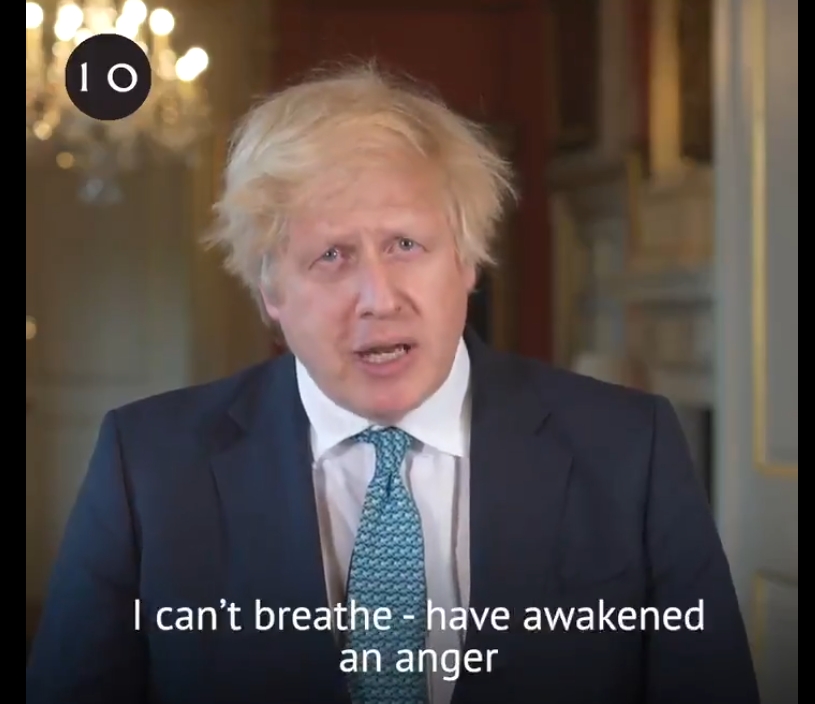 https://www.politicshome.com/news/article/boris-johnson-will-not-hesitate-to-bring-back-lockdown-measures-if-coronavirus-infections-spike-again
"We are only able to make these changes because we have persevered together and stuck to our path. We had five tests and we met them.  We had a plan and we stuck to it," he added.

"The Government asked a huge amount of all of you and the people of this country met that challenge with good humour and common sense."

The PM was joined by Chief Medical Officer and Chief Scientific Adviser Sir Patrick Vallance at the daily briefing, the last regular one the Government is planning.

The top advisers made clear that the public would need to remain vigilant to prevent further spread - and stressed that some decisions may need to be reversed if cases spike.

“All of us, in every country, are having to find a sustainable balance," Professor Whitty said.

"Because we have to live alongside this virus, for the foreseeable future, and find a way."

He added: “No decision is going to be risk- free. It's about finding a balance of risks that allows us to operate in a reasonably normal way for a prolonged period.”

Although social distancing guidelines have been cut from two metres to "one metre plus" in England, Proffessor Whitty said people should try to keep to two metres where possible.

"Nobody thinks it is, and we may, at some point, say that particular bit of the decisions that were taken is too much of risk, with the benefit of hindsight, and we have to go back on it.

"But it is a balance of risk informed by reasonable professional judgements.”

Meanwhile Sir Patrick said: "The disease is growing across the world.

"It's coming down in the UK. But it hasn't gone away, and we need to be absolutely sure that with the new relaxation, that we stay rigorously to the things that need to happen in order to stop the spread.”
https://twitter.com/BorisJohnson/status/1283415778163924994
https://www.youtube.com/watch?v=MR7HZkn1GG8